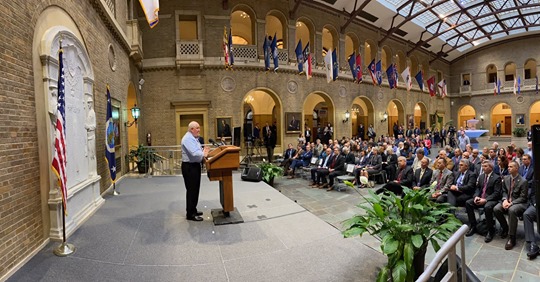 Federal agriculture officials are dropping the requirement that all THC testing on hemp crops must be performed at laboratories registered with the U.S. Drug Enforcement Administration (DEA), according to industry sources.

And food and drug regulators say it’s a “fool’s errand” to get people to stop taking over-the-counter CBD.

Greg Ibach, undersecretary for the U.S. Department of Agriculture (USDA) told members of the National Association of State Departments of Agriculture (NASDA) meeting in Arlington, Virginia, that USDA and DEA have reached an agreement to remove the requirement for hemp farmers to have their crops tested in DEA-registered laboratories. The DEA requirement was included in the interim final rule for domestic hemp production, released Oct. 31.

“Getting rid of this ridiculous DEA testing requirement is a step in the right direction by the USDA,” said Schneider. “Hopefully this means that USDA has come to their senses and will be making better and smarter rules going forward.”

Many of them took issue with the DEA testing requirement.

There are 47 laboratories currently registered with the DEA and many states do not have a registered laboratory, which would require state, tribal and federal law enforcement agents responsible for testing hemp crops to send samples from out of state within a tight, 15-day testing window.

William Richmond, director of the USDA’s Domestic Hemp Production program, told farmers at the Industrial Hemp Summit in Virginia on Monday that testing and sampling requirements were among the aspects the agency could change.

Other parts of the rule, such as the 0.3% total THC limit and the requirement for information sharing, can be changed only by Congress, Richmond said.

Richmond reiterated on Monday that the USDA will open a public comment period in the fall, to gather industry input on the 2020 production season.

He said Wednesday that the agency is working to move forward with regulations.

“We’re not going to be able to say you can’t use these products. It’s a fool’s errand to even approach that,” Hahn said at the NASDA meeting.

“We have to be open to the fact that there might be some value to these products and certainly Americans think that’s the case. But we want to get them information to make the right decisions.”

The FDA developed a working group following a public meeting and comment period to gather industry input about CBD, but the agency said in November that it had not yet seen enough scientific studies or data to allow it to recognize CBD or products containing it as safe or GRAS.

FDA has not provided a timeline for when it will release guidance on CBD regulation.

We use cookies to ensure that we give you the best experience on our website. If you continue to use this site we will assume that you are happy with it. Ok